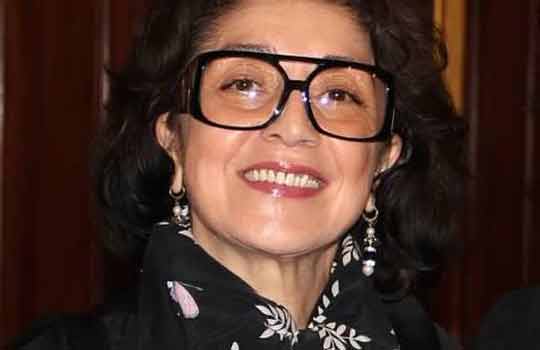 We are honored to welcome the 2022 Marian Stanley Tucker Guest Lecturer, Eteri Andjaparidze, a pianist of international acclaim as one of the most multifaceted artists and insightful pedagogues. Andjaparidze currently teaches at NYU Steinhardtand Mannes School of Music. Born to a family of musicians in Tbilisi, Georgia, Andjaparidze studied at the Moscow State Tchaikovsky Conservatoire with Vera Gornostaeva, a student of Heinrich Neuhaus. The youngest participant, Andjaparidze received Fourth Prize at the Fifth Tchaikovsky International Competition in Moscow and was the first Soviet pianist to win Grand Prix at the Montreal International PianoCompetition. Andjaparidze will teach a masterclass for college students at UofSC and pre-college students studying with members of SCMTA and will present a lecture. These events take place on Thursday, June 16 at 10:00 AM and 4:30 PM in the UofSC School of Music Recital Hall.

The purpose of the Marian Stanley Tucker Lecture Series is to serve as an outreach program for professional piano teachers and connoisseurs of piano as part of the Southeastern Piano Festival at the University of South Carolina School of Music. Through the establishment of an endowed Marian Stanley Tucker fund, the Southeastern Piano Festival can now offer free educational workshops with some of the most revered and well-respected authorities on piano and piano pedagogy in the country.

"...quite a pianist in the grand manner... an astonishing technique and tone, and a fine sense of poetry and romance" — So stated the New York Herald Tribune upon Anna Marian Stanley's solo debut at Carnegie Hall in 1948, and thus began the long and distinguished career of Marian Stanley Tucker. She was awarded top prize in a competition sponsored by the Associate Concert Bureau in 1948 and was a Gold Medal winner of the Bicentennial Piano Recording Festival in 1957 and 1963. She was graduated in 1947 from Converse College with a Bachelor of Music degree and continued graduate study at that same institution. Her principal teachers include Mary Kindelburger Eschleman, Ernst Bacon, Lionel Nowak, John MacEnulty, George Luctenberg, John Ericksen, and Sidney Palmer.

Marian Stanley Tucker with her students

Marian Stanley Tucker has been teaching children to play the piano for over 57 years. Mrs. Tucker has had a great impact in the local community promoting music and has inspired and influenced countless students and families in our community. This fund was established in the summer of 2004 to honor the contributions of Mrs. Tucker to the musical life of Columbia and to the musical education and development of our young people. Contributions may be made to this fund at any time. Please contact School of Music Director of Development Polly Laffitte at 803-777-4337 for information on how you can contribute to this fund.

The series were inaugurated at 2005 Southeastern Piano Festival by Jane Magrath, Professor of Piano and Piano Pedagogy at the University of Oklahoma, distinguished expert in the field of piano pedagogy.

Marian Stanley Tucker and her studio