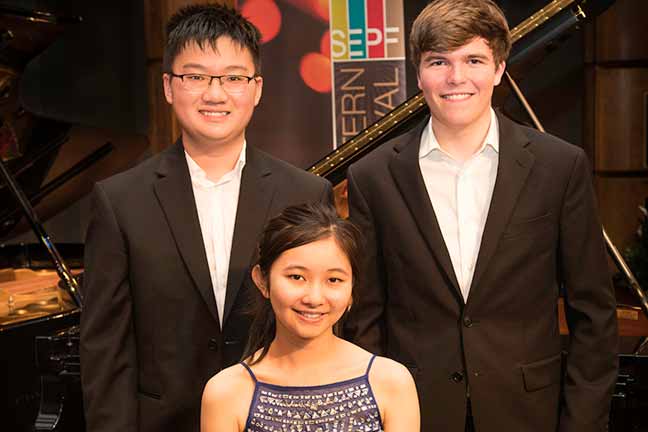 Arthur Fraser International Piano Competition is sponsored by the Symphony League of the South Carolina Philharmonic.

THIRD PRIZE: $1,500
Sponsored by Robert and Lisa Wilcox, in memory of Madge Palmer

First Prize Winner will perform a complete concerto with the South Carolina Philharmonic in Masterworks concert series during the 2023/2024 season. Second and Third Prize Winners will have opportunities to perform with the SC Philharmonic and SC Youth Orchestra at the discretion of the SC Philharmonic Music Director. Other engagement opportunities for all prizewinners are at the discretion of the Artistic Director of the Southeastern Piano Festival.

Award for the best performance of a contemporary work written since 1990: $500

Three DISCRETIONARY AWARDS of $300 each

BEST PERFORMANCE of SOLO WORK AWARD: $500
Given by the Young Jury in honor of Isabel Sparkman 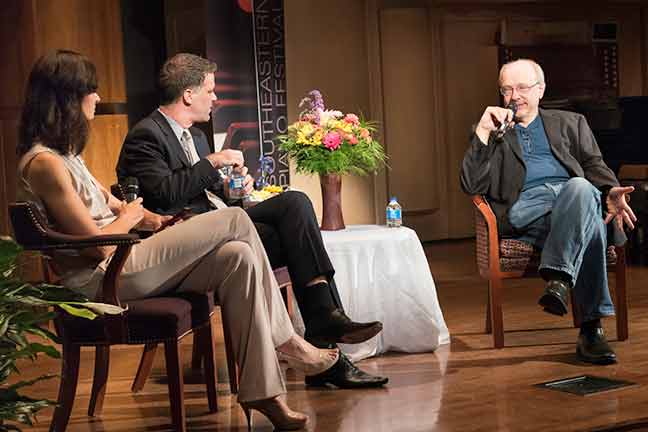 USC SCHOOL OF MUSIC SCHOLARSHIPS: Contingent upon acceptance to the University and the School of Music, all competition prize-winners will be offered USC music scholarships.

PARTNERSHIP WITH YOUNGARTS:
All prizewinners of the Arthur Fraser International Piano Competition will automatically advance past the regional screening round of National YoungArts (National Foundation for Advancement in the Arts), should they choose to apply to that program. The National YoungArts Foundation identifies and nurtures the most accomplished young artists in the visual, literary, design and performing arts and assists them at critical junctures in their educational and professional development. It is the only organization in the United States that is empowered to nominate the U.S. Presidential Scholars in the Arts, one of nations highest honors for high school students. For more information, visit the YoungArts website here.

Jeffrey Brown
Professor of Piano and Director of the School of Music, Western Illinois University


Symphony League of the South Carolina Philharmonic, founder and sponsor of the Arthur Fraser International Piano Competition, is dedicated to fostering, promoting and increasing musical knowledge and appreciation of the performing arts in the community. Comprised of about 200 men and women, Symphony League members volunteer many hours to support the South Carolina Philharmonic, the Arthur Fraser International Piano Competition and music education and appreciation in the Midlands. We invite you to join the Symphony League and to share in the work of the organization. No musical knowledge is necessary - just a desire to promote and support some of the most important cultural resources in our community.

All Southeastern Piano Festival participants will perform during the Arthur Fraser Piano Competition. Participants who wish to be considered for ALL prizes must perform the following:

Participants who do not wish to perform a concerto may compete for the discretionary prizes, performing two solo piano works contrasting in styles and periods. Participants may declare a "non-competing" status, in which case they will play one or two solo piano work(s), will receive comments from the judges, but will not be considered for prizes.

All performances must be from memory. A contestant may be interrupted during the performance to accommodate the maximum allotted time of 18 minutes. All winners of the competition are required to participate in the winners' recital. All judges' decisions are final.

ELIGIBILITY: Contestants must be registered participants of the 2022 Southeastern Piano Festival. All prizewinners are required to participate in the Winners' Recital. Past winners of the Arthur Fraser International Piano Competition who have performed with the South Carolina Philharmonic are not eligible to compete for the top three prizes; however, they are eligible to compete for all other awards. Contestants currently studying with members of the Arthur Fraser International Piano Competition jury are not eligible for the competition but are still eligible to be participants in the Southeastern Piano Festival.