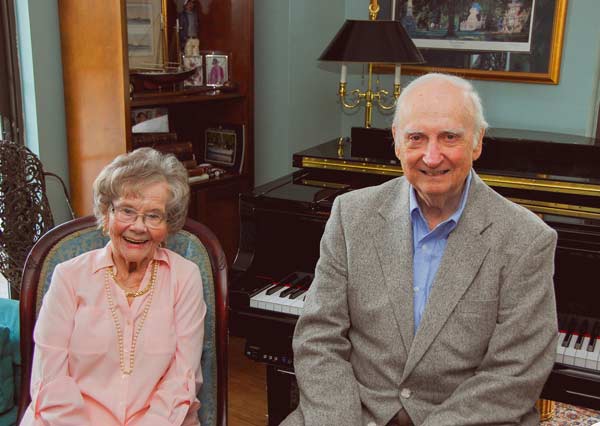 Richard E. “Dick” and Melissa B. “Missie” Day, familiar and beloved names at the University of South Carolina School of Music, have been significant supporters throughout the development and progress of the school and the Southeastern Piano Festival.

Newly wed, and after graduating from the University of Pennsylvania (Wharton) in 1951, Dick joined the Navy, serving during the Korean Was; earned a Law degree from the University of Michigan; and practiced law in Chicago and Washington, D.C. He began his teaching career at the University of North Carolina Law School in 1961. From there, he taught at Ohio State University Law School before joining the faculty at South Carolina in 1975. Missie and Dick spent extensive time traveling, including Dick’s teaching and lecturing in England. Dick retired in 1980, earning the titles of former Dean and Distinguished Professor of Law Emeritus, and continues to support the USC School of Law to this date.

Both Dick and Missie grew up with a love of music. Missie was raised in Philadelphia where she frequently attended Philadelphia Orchestra concerts conducted by Eugene Ormandy, fondly remembering that she asked her parents for season tickets on her 15th birthday.

Although Dick earned his degrees in economics and Law, he started his college career enrolled as a music major, after studying piano from the age of 9. He still enjoys playing, and still has trouble finding the time to practice.

Missie and Dick have served as founders and President of the Friends of the School of Music at USC, which provides scholarships, encourages community participation in musical events and sponsors such special activities at the School of Music as the Moveable Musical Feast, which Missie founded and named. Both have been active in the Symphony League and its Arthur Fraser International Piano Competition. In addition to scholarships for piano students, the Days have donated two pianos to the school, which are used as first-rate practice instruments for piano students.

The Day’s motivational factor in supporting the Southeastern Piano Festival over the past 16 years is quite straightforward. “We believe in the directors and their vision for the Festival. They helped the school become recognized as a world-renowned music program” said the couple. Dick and Missie have been involved with the festival since its inception in 2003 and have attended concerts each year, hosted house concerts to raise money and have also accommodated guest artists in their home. “It feels like I’m getting the bargain. Music is a basic that everybody should hope to have,” said Dick.

The couple enjoy every aspect of the festival, especially the competition and the evening concerts by the guest artists. “I love the competition and seeing the amazing talent these young people have,” said Dick. The generous support of Missie and Dick Day is vastly appreciated by Dean Tayloe Harding, Festival Directors Marina Lomazov and Joseph Rackers, and the entire SEPF staff.