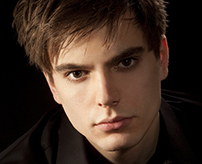 Praised by The New York Times for the “passion and poetry” in his performance, pianist Andrew Tyson is emerging as a distinctive and intriguing musical voice. Since winning the Young Concert Artists International Auditions in 2011, Mr. Tyson has received a 2013 Avery Fisher Career Grant, Sixth Prize at the 2013 Queen Elisabeth International Piano Competition of Belgium, and Fifth Prize and the Terence Judd – Hallé Orchestra Prize at the 2012 Leeds International Piano Competition. The Prize brought three performances of Rachmaninoff’s Concerto No. 2 with the Orchestra in November 2012, leading to engagements in the 2013-2014 season.

Mr. Tyson has performed at the Coolidge Auditorium at the Library of Congress in Washington, DC, the National Chopin Foundation in Miami, the Brevard Music Festival, the El Paso Chopin Music Festival, and in New York at the International Keyboard Institute & Festival. Mr. Tyson has performed abroad at the Paul Klee Zentrum in Switzerland, the Filharmonia Narodowa in Poland, the Sintra Festival in Portugal, and the Festival Cultural de Mayo in Guadalajara, Mexico. He has appeared as soloist with orchestras including the National Orchestra of Belgium under Marin Alsop and the Orchestre Royal de Chambre de Wallonie. He has also soloed in his native North Carolina with the Durham Symphony, the Raleigh Symphony and the Chapel Hill Philharmonia.

He made his New York recital debut in the Rhoda Walker Teagle Concert at Merkin Hall and his Washington, DC debut at the Kennedy Center’s Terrace Theater in the Young Concert Artists Series to acclaim. At the YCA Auditions, Mr. Tyson was awarded YCA’s Paul A. Fish Memorial Prize and the John Browning Prize as well as three performance prizes: the Brownville Concert Series, the Lied Center of Kansas, and the Bronder Prize for Piano of Saint Vincent College.

Mr. Tyson made his orchestral debut at the age of 15 as winner of the Eastern Music Festival’s competition to appear with the Guilford Symphony. His early studies were with Dr. Thomas Otten of the University of North Carolina. He graduated from the Curtis Institute of Music where he worked with Claude Frank, earned his Master’s degree at The Juilliard School working with Robert McDonald, and is currently in the Artist Diploma program at The Juilliard School, where he won the Gina Bachauer Piano Competition.