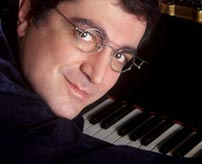 A student of such legendary teachers and musicians as Gornostayeva, Naumov, Pletnev and Vlasenko in the Moscow Conservatory, Sergei Babayan was one of the the first pianists from the former USSR who was able to compete without government sponsorship after the collapse of the system.

Immediately after his first trip outside of the USSR, he won consecutive first prizes in several major international competitions including the

Since that time he has had major engagements and concert tours throughout Europe, Japan, New Zealand, Australia, South Africa, South America and the USA.

His New York recitals at Carnegie Hall and Alice Tully Hall, performances with the Cleveland Orchestra, Baltimore Symphony, and Detroit Symphony met with huge critical acclaim, as have his many subsequent recital and concerto performances throughout all the major cities in the US. His concert schedule has included performances and broadcasts throughout major European cities and extensive tours of Japan. He appeared with recitals in such important venues as Salle Gaveau in Paris, Wigmore Hall in London, Carnegie Hall in New York, the Warsaw Philharmonic, Severance Hall in Cleveland, Mariinsky Theatre in St.Petersburg, Herkulessaal in Munich, Liederhalle in Stuttgart, Me

Sergei Babayan appeared in numerous major music festivals in France, Germany, UK, Poland, Spain, and the US. His concerts have been broadcast by WQXR, WCLV, Radio France, Polish Radio and Television, BBC-TV and NHK Satellite Television.

He has made several highly praised recordings for EMC, Connoisseur Society and Pro Piano labels. His recordings of Scarlatti, Ligeti, Messiaen, Mozart, Mendelssohn, Ravel, Schubert, Liszt, Vine, Respighi and Prokofiev garnered high acclaims including a “critic's choice” in the New York Times praising Babayan’s “extraordinary technique and ability to play densely harmonized works with illuminating transparency and a daunting measure of control”. American Record Guide joins in these accolades praising his “phenomenal level of color and imagination”. About the recording of Scarlatti Sonatas American Guide says: “It can stand proudly besides that of Horowitz...”

Mr. Babayan has appeared with many major orchestras throughout the world including the London Symphony, Cleveland Orchestra, Orchestra of Mariinsky Theatre, the Warsaw Philharmonic, the BBC Scottish Symphony Orchestra, the Orchestre Nationale de Lille, and New World Symphony. His performances with the Detroit Symphony Orchestra and the Baltimore Symphony Orchestra were received with great enthusiasm by audiences and critics alike. He has collaborated with such conductors as Valery Gergiev, Yuri Temirkanov, Neeme Jarvi, Hans Graf, David Robertson, Tugan Sokhiev, Kazimierz Kord and Michael Christi, and his concerto repertoire is constantly growing - at this point he has 54 concertos which have been performed.

His unusual and imaginative recital programming has always elicited interest and praise. Mr. Babayan is an enthusiastic advocate of new music and has an immense repertoire.

Sergei Babayan’s deep interest and love for the music of Bach has led him to study more recently with Helmuth Rilling. Always in search of the new, Sergei Babayan studied conducting in order to deepen his understanding of the orchestra, to be able to study and perform some of the music of the 20th century which is particularly interesting for him.

In May of 2006 Sergei Babayan was invited by Valery Gergiev to perform Lutoslawsky’s piano concerto in the XIV International Festival “Stars of the White Nights” in St. Petersburg with the orchestra of Mariinsky Theatre. He has recently invited by Gergiev to perform Prokofiev‘s 3rd piano concerto in his Easter Festival, and returned to London in 2010 to perform at the Barbican with the London Symphony Orchestra under the direction of Gergiev to much critical acclaim. Other recent highlights include recital in Mariinsky Theatre and at the 92nd Y in New York, the Prague Spring Festival with the Janacek Chamber Orchestra, performance of Rachmaninoff’s Third Piano Concerto in Belfast which was broadcast by the BBC.

This season (2011-12) Sergei Babayan makes a number of appearances with Valery Gergiev in St. Petersburg’s Mariinsky Theatre, Bolshoi Hall of the Moscow Conservatory and Théâtre des Champs-Elyseés in Paris, performing Beethoven’s Concerto No. 1, the Rachmaninov 3rd Concerto and Prokofiev’s Concerto No. 5, which was broadcast live on Medici TV.

“Mr. Babayan belongs to an elite breed of new pianists. This is elegant playing, intelligent yet colorful, rational yet never wanting for passion and tenderness, irreproachable on every level.”
~ American Record Guide “One would be hard put to name a Bach interpreter of his standing today. The only comparison that springs to mind is the famous recording of Dinu Lipatti… His performance has tonal spectrum many orchestras would envy. Babayan is no mere pianist. He is a master-musician for whom the piano is his voice, his orchestra.”
~ The Scotsman

Sergei Babayan is a Steinway Artist.