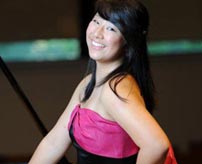 Naomi Causby is a rising piano virtuoso and a freshman at The Juilliard School under the tutelage of Jerome Lowenthal and Robert McDonald. She is a Steinway Young Artist one of only a few young pianists in the world to be admitted to the roster.

She made her orchestra debut, performing Beethoven's Piano Concerto in C minor with the Greenville Young Artist Orchestra and Greenville Symphony combined (SC). She has also performed with the South Carolina Philharmonic, performing Prokofiev 3rd Piano Concerto. She has performed on local radio and television programs such as ETV/NPR Classical Station 93.1, ETV Television, WachFox 57, and Kansas Public Radio. In the spring of 2013, Naomi will be going on a concert tour in Sao Paulo, Brazil and Bauru, Brazil.

Formerly a resident of Columbia and a student of Marina Lomazov and Joseph Rackers, Naomi retains strong ties to South Carolina and is a frequent guest performer at multiple venues in the state.