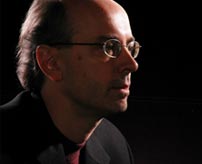 Professor of Piano,
University of South Carolina School of Music

Phillip Bush is a pianist of uncommon versatility with a repertoire extending from the 16th century to the 21st. His active and unconventional career has taken him to many parts of the globe. Since his New York recital debut at the Metropolitan Museum in 1984, Mr. Bush has appeared as recitalist throughout North America, as well as in Europe, Asia and the Caribbean. He made his Carnegie Hall concerto debut in 2001 with the London Sinfonietta to critical acclaim, replacing an ailing Peter Serkin on short notice in concerti by Stravinsky and Alexander Goehr. He has also appeared as soloist with the Osaka Century Orchestra, Cincinnati Symphony, Houston Symphony and several other orchestras, in repertoire as far-ranging as the Beethoven concerti and the American premiere of Michael Nyman’s Harpsichord Concerto. 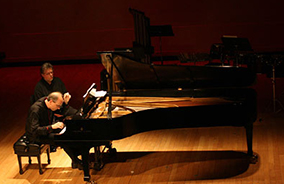 In 1993 Mr. Bush founded MayMusic in Charlotte, a critically acclaimed and innovative festival in North Carolina that annually presented chamber and contemporary music, film screenings and other cross-disciplinary collaborations. He served as Artistic Director of that festival from 1993 to 1998. In 2007, he was named Artistic Director of the Bennington Chamber Music Conference, the largest (over 300 participants and 50 faculty) and oldest (founded 1946) institute for amateur chamber musicians to study with professional concert artists. His role at the conference involves providing overall direction for the teaching program, as well as curating a six-concert chamber music festival featuring the artist-faculty each year.

A fierce advocate for contemporary music, Phillip Bush has performed often with many of the New York area's most renowned new music ensembles, including Bang on a Can All-Stars, Philip Glass Ensemble, Steve Reich and Musicians, Group for Contemporary Music, Newband, Sequitur, Parnassus and New Music Consort. From 1995 until 2010 he was a member of the Milwaukee-based new music group, Present Music. Mr. Bush's efforts on behalf of contemporary music have earned him grants and awards from the Mary Flagler Cary Charitable Trust, the Aaron Copland Fund, ASCAP, Chamber Music America and the National Endowment for the Arts. His discography as soloist and chamber musician has now reached 40 recordings on labels such as Sony, Virgin Classics, Koch International, ASV, New World Records, Denon and many others.