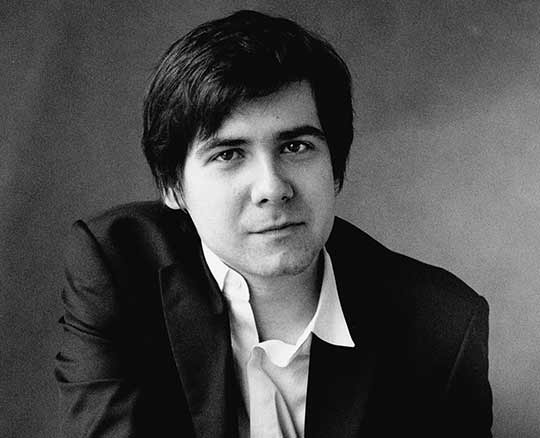 Vadym Kholodenko is fast building a reputation as one of the most musically dynamic and technically gifted performers of the new generation of pianists, praised by the Philadelphia Enquirer in his performance of Tchaikovsky with the Philadelphia Orchestra for “his absorbing melodic shading [and] glittering passage work”. Winner of the 2013 Gold Medal at the Van Cliburn International Piano Competition, Kholodenko has begun to forge an international career throughout Europe, Asia and North America to great critical acclaim. Previous awards include First Prize at the 2011 Schubert Piano Competition in Dortmund, First Prize at the 2010 Sendai Piano Competition in Japan and the Grand Prix at the Maria Callas Competition in Athens.

From the 14/15 season Kholodenko became the first ever “Artist in Partnership” with the Fort Worth Symphony Orchestra. This three-year collaboration includes performances of the complete Prokofiev piano concertos which will also be recorded for Harmonia Mundi, in addition to chamber music projects and international touring. Artistic partnerships form an integral part of Kholodenko’s musical drive. A committed chamber musician he has collaborated with Vadim Repin, Alena Baeva and cellist Alexander Buzlov. His strength in this area was recognised by the Cliburn Competition judges who additionally awarded him the competition’s prize for Best Chamber Music Performance.

Kholodenko has collaborated with distinguished conductors including Leonard Slatkin, Vladimir Fedoseyev, Miguel Harth-Bedoya, Yuri Bashmet, Vladimir Spivakov, Kazuki Yamada and Carl St Clair. In North America he has performed with the Philadelphia Orchestra, Indianapolis Symphony, Kansas City Symphony, Rochester Philharmonic, and San Diego Symphony Orchestras, and given recitals throughout the country including in Boston and at the Aspen Music Festival. Other recent highlights include performances with the BBC Scottish Symphony Orchestra, Tokyo Metropolitan Symphony Orchestra, Orquestra Sinfónica Do Porto Casa Da Música, Malmö Symphony Orchestra, RTVE Symphony Orchestra in Madrid, Orquesta Nacional de España and recitals in the UK, Radio France in Paris, Lucerne, Moscow Conservatoire, at the SWR Schwetzignen Festspiele and throughout Japan. In 2013 he held a residency at the Mariinsky Concert Hall where he was named Artist of the Month by Valery Gergiev.

Highlights of the 2016/17 season include concerto engagements with the Royal Philharmonic Orchestra (Prokofiev), Norwegian Radio Orchestra in Bucharest (Grieg), Brandenburgisches Staatsorchester (Tchaikovsky), Prague Symphony Orchestra at the Bratislava Festival (Prokofiev), Malaysian Philharmonic (Grieg) and a return to the RTVE Symphony Orchestra (Scriabin). He also performs Prokofiev in Paris with the Marrinsky Theatre Orchestra under Valery Gergiev. Recital tours take Kholodenko to China and Japan, where performances include Beijing, Tokyo and Fukui. In Europe he performs in Eindhoven and Baden as well as returning to the UK for a recital tour including LSO St Luke’s in London. Kholodenko also takes up the position of Artist-in-Residence at the Fribourg International Piano Series from the 2016/17 season.

Kholodenko’s recordings for Harmonia Mundi include the Grieg Piano Concerto and Saint-Saens Piano Concerto No 2 with the Norwegian Radio Orchestra / Harth-Bedoya, which was released in August 2015 to critical acclaim and awarded “Editor’s Choice” in Gramophone “a truly outstanding recording”. His latest release for the label — the first instalment of his Prokofiev Concerto Cycle (Nos 2 & 5) — was praised by Gramophone for its “forthright, lithe ad virile performances”. The rest of the cycle is planned for release in 2017.

Vadym Kholodenko was born in 1986 in Kiev, Ukraine. At the age of 13 gave his first concerts in the USA, China, Hungary and Croatia and in 2004 he was awarded the Russian Youth National Prize “Triumph”. In 2005 moved to Moscow to study at the Moscow State Conservatoire under the tutelage of the Honoured Artist of the USSR, Professor Vera Gornostaeva.