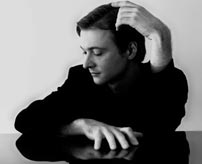 “Scintillating… everything was beautifully polished, fluent, and defined. Lyricism was elegantly shaded and reached ecstasy… expansive in phrasing; noble and passionate.”

“His rapid-fire performance revealed the work’s orchestral conception—no surprise, perhaps, from a performer who included one of his own compositions in Sunday’s recital. Full of remarkable playing…”

“Levkovich brought an intense spirituality to his playing on Sunday -- a mood made most obvious in his incantatory reading of Messiaen… In a beautifully balanced program, he matched Messiaen's mystical yearnings for God with works that suggested the yearning loneliness of two composers who lived in exile from their homelands: Chopin and Rachmaninov.”
“…he conjured a golden sound, unfolding long, liquid passages and sudden bursts in a manner that reminded one that Chopin's scores often developed from keyboard improvisations.”

“Levkovich is blessed with a radiant physical appearance, confident craftsmanship, and a pleasant sound.”

“ An artist of rare gifts… blond, extremely slender with an earnest and youthful face, Levkovich displayed a virtuoso technique that admits of no flaws – as well as the mastery and maturity that holds that virtuosity to absolute integrity in serving the music he chooses to play.”
“…passages that are imbued with massive sound and blazing accuracy carry their full weight in meaning and emotion. His shaping of each piece is breath-haltingly complete.”
“…one of the truly elect, an artist with technique, a ravishing touch, sensitivity, perspective and intelligence. Seldom do these qualities come together so compellingly.”

“A young pianist with a bright future.”

“…the musical equivalent of Olympians… Levkovich is a gold medal athlete at the keyboard. His secure technique was used to great advantage.”

Ukrainian pianist saved the fourth program of the season from ship wreck
“….as if leaving a business card, Levkovich gave superb performance of Rachmaninoff’s Second Piano Concerto… spectacular display of virtuosity in the Blue Danube by Johann Strauss…...Both works won pulsating applause from the audience that completely filled the room.”

“…..Pianists who concentrate on solo repertoire tend either to overpower colleagues or defer in chamber music. Levkovich maintained sure balances throughout the Brahms (Quintet), knowing when to assert, interact and support…..Levkovich managed the show (Strauss’ “Blue Danube”) with enormous panache, and more than a little charm.”

“…….(with the Cleveland Orchestra and conductor Jahja Ling) Performing Rachmaninoff's Piano Concerto No. 2, Levkovich cut an alternately haunting and gripping figure, demonstrating complete control and intuitive understanding no matter what the challenging score threw at him.”

“……Levkovich has an elegant presence and engaging style at the piano. “