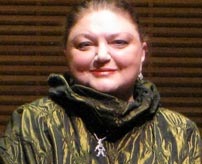 Oxana Yablonskaya was born in Moscow. As an adolescent she attended The Moscow Central School for the Gifted under the tutelage of great Anaida Sumbatyan, with whom she worked with until the age of 16. She later studied at the Conservatory of Moscow with the legendary Aleksandre Goldenweiser. At 22, she began a professional relationship with Tatiana Nikolayeva in the Doctorate Program, later acting as her assistant at the Moscow Conservatory. Following graduation with high honors, she was introduced to the Western World in Paris at the Jacques Long-Thibaud Competition in 1963, the Rio de Janeiro Competition in 1965, and the Vienna Beethoven Competition in 1969. She won top prizes in all three competitions, and received numerous invitations for return engagements, but because of the Cold War, was not allowed to do so.

While still in the USSR, Ms. Yablonskaya performed Shostakovich's Piano Concerto #1 with the Moscow Philharmonic under conductor Yury Simonov at the Composers Jubilee Concert in the Kremlin. She was the first performer to play Rodion Shchedrin's "Basso Ostinato," which became her signature piece. Her status as a consummate professional was heightened by many prominent Soviet and foreign composers dedicating their music to her.

Despite the reputation she had earned within the Soviet Union and being a prize winner of three international competitions, she was never permitted to play outside the Eastern Bloc. Yet, she recorded for the Melodya label and had earned the prestigious title of Soloist of the Moscow Philharmonic. The title put her in the company of elite artists such as Gilels, Richter, Rostropovich, Oistrakh and Kogan. Outstanding solo performances with the Bolshoi Orchestra, the Moscow Stars series, and the Shostakovich 65th Birthday Celebration Concert were confirmations of her remarkable talent.

In 1975, distressed over constant restraints on her personal and artistic freedom, she applied for a U.S. visa. Her actions resulted in a loss of her position as a professor at the Moscow Conservatory. She inherently was deprived of all concert engagements. She waited more than two years for a visa and finally, she was allowed to leave the country with her father and young son due to the diligence and petitioning by Leonard Bernstein, Stephen Sondheim, Richard Rodgers, Katherine Hepburn, Bar Ilan, and over 45 famous writers, musicians, senators, and actors.

Ms. Yablonskaya arrived in New York in 1977, unknown, unheralded, and not having touched a piano in more than two years. She made her first New York appearance in a recital at the Alice Tully Hall in Lincoln Center only four months later, and received laudatory acclaim from the press. Her Carnegie Hall debut recital the following October was attended by a capacity crowd, and she has since taken her place among the major pianists of the world.

Once considered 'The best kept secret of the Soviet Union,' Ms. Yablonskaya has now performed in more than 40 countries.

Following her triumph at her London recital debut in the Queen Elizabeth Hall in 1982, the Daily Telegraph wrote: "Yablonskaya is the sort of pianist who accomplishes with ease and naturalness what others struggle for a lifetime to achieve." In 1986, following her Canadian performance with the National Symphony under conductor Mstislav Rostropovich, a music critic of the Toronto Star wrote, "She played Rachmaninoff's 3rd as if it was written for her."

Ms. Yablonskaya has emerged as one of the most compelling talents of her generation. She has performed with many of the finest symphony orchestras in the world and with many of the leading conductors of our time. An extraordinary recitalist, she is equally renowned for solo performances. In addition to Carnegie Hall and Lincoln Center, she has performed in the Royal Albert Hall in London, Teatro Colon in Buenos Aires, Suntory Hall in Tokyo, Orchestra Hall in Chicago, Royal Concergebouw in Amsterdam, Great Hall of Moscow Conservatory, Great Hall of St. Petersburgh Philharmonic, Queen Elizabeth Hall in London, Sheldonyan Theatre and Holywell Music Room in Oxford, England and many more.

Ms. Yablonskaya has collaborated in performances with such celebrated conductors as:

In 1990, after a 13 year absence, Ms. Yablonskaya returned to Russia for a sold-out concert, master classes and recitals at the Moscow Conservatory. Since then she has returned on a regular basis and is once more recognized as an elite piano virtuoso in Russia.

In addition to her success as a concert pianist and recording artist, Ms. Yablonskaya has held the position of Professor of Piano at The Julliard School in New York City. She has lectured numerous master classes at many distinguished music schools, academies, conservatories and festivals throughout the world such as Newport and Bowdin in USA, Flaine and Tours in France, Lago Maggiore in Switzerland, Oxford Philomusica in England. Dr.Yablonskaya is a Co- Founder of Puigcerda Musica Clasica International Festival in Spain since 1998.

Ms. Yablonskaya made numerous editions of piano music by Cimarosa, Tchaikovsky, Lyadov, Balakirev, Gluck, Glinka and others for International Music Company and currently continues her collaboration with this prestigious music publishing company.

Oxana Yablonskaya and her son Dmitry co-founded new Festival in Duxbury, MA in 2006.

Among her numerous recordings, Ms.Yablonskaya’s Liszt/Schubert CD won the Grand Prix du Disque from the International Liszt Society in Budapest. In the December 1995 review of her Tchaikovsky CD, the American Record Guide wrote, “Oxana Yablonskaya is an artist who deserves to be heard and in any repertory she chooses.”

In March of 2006 Ms. Yablonskaya performed inaugural "Sold Out" recital in Carnegie Zankel Hall in New York marking the Founding of Chopin Society of New York of which she was appointed Vice-President and Music Director.

The 6 concert tour of France with a "Sold Out" concert in Paris's hystorical Magador Theatre followed immediately after where Oxana Yablonskaya performed Rachmaninoff 3rd Piano Concerto with Orchestre National D'Ille de France under the direction of Mo. Yablonsky.

After a magnificent performance at Magador Theatre French critic Cyril Brun called Yablonskaya "Grand Tsarina of Russian piano who in an instant opened for us the whole Imperial Russia."

On December 15th of 2006 another "Sold Out" "Oxana Yablonskaya and Friends" event took place at Carnegie Zankel Hall, where Oxana and Dmitry Yablonsky performed Chopin's Cello Sonata and Grand Polonaise and received standing ovations. Composer Lowell Liberman wrote after attending this concert: "Profound performance of this Sonata will stay in my memory for a long time."

The 2008 is a 70th Birthday Jubilee Celebration of Oxana and all year she has been performing starting in Italy with New Years Day recital in Catania, then in Israel she performed Tchaikovsky 1st concerto four times, Grieg concerto in Turkey, solo recital in Tuscany and Master Classeses in Hamamatsu Academy, Japan, judging Liszt Competition in Utrecht, Jose Iturbi in Los Angeles, E-Piano Competition in Minneapolis, teaching in Spain, solo recital at MTNA in Los Angeles, Master Classes and chamber music concert in Nice, recording of Tchaikovsky "Seasons" and "Album for the Young". Two concerts on November 29th and December 1st were televised on National TV in Taiwan –Oxana performed Shostakovich 1st Concerto with National Symphony Orchestra in Taipei and Taichung. The Grand conclusion of year long celebration took place on December 11th with the Jubilee Concert at Carnegie Zankel Hall in New York where Oxana Yablonsaya performed Beethoven 4th,Chopin 2nd and Shostakovich 1st concerti under the direction of her son Grammy Award nominated conductor Dmitry Yablonsky.