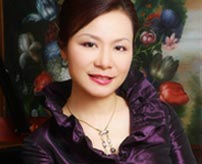 Jacqueline Tang (Tang Beihua) is a piano professor of the Shanghai Conservatory of Music and the Shenzhen Academy of Arts, and is concurrently the Shanghai regional director of the University of Minnesota Alumni Association (UMAA). She has been a jury member of many international competitions, such as the Concurso International de Piano Premio 'Jaen' and Conservatorlo Municipal de Musica "José Iturbi" de Valencia in Spain, the Premio Mauro Paolo Monopoli in Italy, among others. In 2007 she was nominated as a Piano Teacher of Merit of Shanghai and received the Special Award for Outstanding Teachers, and is a recipient of multiple awards from the Shanghai Conservatory.

In the 50th Concurso International de Piano Premio 'Jaen' in Spain in 2008, her 16-year-old student Qin Yunyi emerged from four rounds of competitions and won the First Prize and the Audience Award, becoming the youngest prize winners in the history of this event. In addition to a gold medal, an award of 25,000 euros and a certificate, Qin also received a contract from the recording company Naxos, which commissioned her to make a recording and launch a concert tour in Spain. On August 19, 2008, Qin won unanimous approval for her performance at the "China Piano Night", an event at the National Performing Arts Center (NPAC) of Beijing to grace the ongoing Beijing Olympics.

On September 21, 2008, in the "Bravo China" concert in NPAC to celebrate the young pianists, two of the four featured performers were Ms. Tang's students, Qin Yunyi and Yin Cunmo. "This is a well-conceived event to capture the best pianism of numerous young piano talents of China, and also a showcase of the piano education before the world; it reflects NPAC's effort to foster young artists, adding a glorious finishing touch to the five-month-long Olympic Performing Season", noted the media in Beijing.

In February 2008, Yin Cunmo, a 13-year-old student of Ms.Tang, recorded the technically-demanding Transcendental Studies by Franz Liszt. Given his young age and his artistic merit, the recording was considered a great feat that has earned him a reputation as "a young Liszt reborn."

In January 2005, Ms. Tang was nominated as a "Teacher of Merit" in the first International Piano Festival of the Shanghai Conservatory of Music. In 2006, two of her students won the First Prize in the 16th Baletta International Piano Festival in Italy. In November that year, she also won the First Prize in Conservatorlo Municipal de Musica "José Iturbi" de Valencia in Spain with an award of 10,000 euros.

During her 12 years' stay in the USA, she has taught many prize-winning students in various competitions. In five consecutive years, her students were first-prize winners in the Schubert Scholarship Competition, a major event in Minnesota held by the Schubert Club. She has also been a jury member of many competitions. In addition to these achievements, one of Tang's students has played Beethoven's third concerto with the St. Paul Chamber Orchestra under Has Graf.

Tang was a prize winner in the first China National Piano Competition launched by the Ministry of Culture of China. In 1990, she played piano concertos by Chopin and Mozart with the Central Philharmonic of China and the Guangzhou Symphony, concerts that were broadcast live to critical acclaim. In 1993, she won the "Chinese Piano Piece" award from the first Pearl River Piano Competition. She has received an interview from the Star Tribune, a major newspaper in Minnesota, and was cited as a "Star of the Month."

In July 2005, Ms. Tang and her students Qin Yunyi and Niu Niu.jointly held a concert in an international piano festival in France, an event highly acclaimed by the media and pianists from many countries. Since 2006, Tang has demonstrated the performance of the Czerny studies series and other scores published by the Shanghai Music Press. Her recordings of Czerny 599, 849, 299 and 740 have been released in 14 DVDs. In 2007, she recorded "Oriental Touch" and "70 Favorite Tunes", among others. In addition to her career as a pianist, Tang is a devoted member of charity affairs of the Chinese community in the US. She has been President of the Pan-Pacific Musicians Society and Deputy Chairperson of the Sino-US Minnesota Friendship Board, an organization of some 1,000 members. She has studied with such teachers as Fou Ts'ong, Li Suxing, Wu Leyi, and Alexander Braginsky of the Music School of the University of Minnesota.

Active in China and abroad, Ms.Tang is hailed by media as a pianist "with noble, glorious and soul-touching charisma."