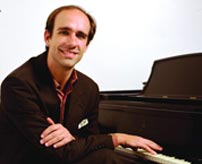 Among his generation of pianists, Christopher Taylor stands out as an innovative musician with a diverse array of talents and interests. During the past few years he has appeared regularly in many important concert halls and developed a loyal following throughout the United States and abroad; critics hail him as "one of the most impressive young pianists on the horizon today" (The Washington Post) and "frighteningly talented" (The New York Times). He is known for a passionate advocacy of music written in the past 100 years—Messiaen, Ligeti, and Bolcom figure prominently in his performances—but his repertoire spans four centuries and includes the complete Beethoven sonatas, the Liszt Transcendental Etudes, Bach's Goldberg Variations, and a multitude of other familiar masterworks. Whatever the genre or era of the composition, Mr. Taylor brings to it an active imagination and intellect coupled with heartfelt intensity and grace.

In recent seasons Mr. Taylor has concertized around the globe, performing throughout Europe, Asia, and the Caribbean. At home in the U.S. he has appeared with such orchestras as the New York Philharmonic, Los Angeles Philharmonic, Detroit Symphony, St. Louis Symphony, and Atlanta Symphony, Houston Symphony, and Boston Pops, and has toured with the Polish Chamber Philharmonic. As a soloist he has performed in New York's Carnegie and Alice Tully Halls, Washington's Kennedy Center for the Performing Arts, the Ravinia and Aspen festivals, and dozens of other venues. In chamber settings, he has collaborated with many eminent musicians, including Robert McDuffie, Robert Mann, and the Borromeo, Shanghai, Pro Arte, and Ying Quartets. His recordings have featured works by Liszt, Messiaen, and present-day Americans William Bolcom and Derek Bermel. Apart from concertizing and recording, he has undertaken various unusual projects. Recent examples include: the commission and premiere of a piano concerto by Derek Bermel with the Indianapolis Symphony, made possible by a Christel Award from the American Pianists' Association; investigations into the compositions of the legendary pianist Gunnar Johansen; performances and lectures on the complete etudes of György Ligeti; and a series of performances of the Goldberg Variations on the unique double-manual Steinway piano in the collection of the University of Wisconsin, an instrument whose rediscovery and refurbishment he has actively promoted.

Numerous awards have confirmed Mr. Taylor's high standing in the musical world. He was named an American Pianists' Association Fellow for 2000, before which he received an Avery Fisher Career Grant in 1996 and the Bronze Medal in the 1993 Van Cliburn International Piano Competition, where he was the first American to receive such high recognition in twelve years. In 1990 he took first prize in the William Kapell International Piano Competition, and also became one of the first recipients of the Irving Gilmore Young Artists' Award.

Mr. Taylor owes much of his success to several outstanding teachers, including Russell Sherman, Maria Curcio-Diamand, Francisco Aybar, and Julie Bees. In addition to his busy concert schedule, he currently serves as Paul Collins Associate Professor of Piano Performance at the University of Wisconsin in Madison. He pursues a variety of other interests, including: mathematics (he received a summa cum laude degree from Harvard University in this field in 1992); philosophy (an article he coauthored with the leading scholar Daniel Dennett appears in the Oxford Free Will Handbook); computing (one project being to create a compiler for a new programming language); linguistics; and biking, which is his primary means of commuting. Mr. Taylor lives in Middleton, Wisconsin, with his wife and two daughters.