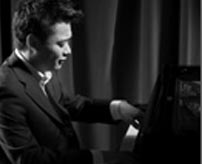 As a child, Chinese pianist Hong Xu would do anything to avoid practicing the piano. “I was a rascal,” says the 23-year old Juilliard student. “Sometimes I would watch television at the same time as I practiced and I would get a terrible pain in my neck from craning to see the screen. But my father soon caught on... he would come home and feel the top of the set to see if it was still warm!” Xu’s father started out working in a piano store and borrowed money to buy his son a piano. His parents now own a very successful piano store in Wuhu. Xu takes credit for his father always being early for work: “My parents wanted me to practice for an hour every day and I would wait until no one was looking and move the clock's hands forward!” Their perseverance paid off. By the timeXu reached the Wuhan Conservatory, he had begun to enjoy the rewards of performing and knew he wanted to be a concert artist. At 16, he made his debut with orchestra in a performance of Rachmaninov’s Second Piano Concerto with the Wuhan Symphony Orchestra. More recently, Hong Xu became a Laureate of the 2006 Honens International Piano Competition and its three-year Artistic and Career Development Program is helping him adapt to life as a touring artist. Xu first traveled to the United States at age 17 to take part in the Gina Bachauer International Young Artists Competition (Salt Lake City) and won Third Prize. He enrolled at the Eastman School of Music (Rochester NY), where he studied with Douglas Humphreys, and was selected to receive the Liberace Foundation Scholarship, a nationally endowed scholarship for pianists. He also won the Mozart Prize at the Cleveland (2005) and Second Prize at the Hilton Head (2004) International Piano Competitions. Today he works toward his master’s degree with Jerome Lowenthal at The Juilliard School. Earlier this year Xu made his German debut on a ten-city recital tour, performed with the Orchestre Métropolitan de Montréal, led by Yannick Nézet-Séguin, and the Juilliard Orchestra under the baton of Vladimir Ashkenazy. He made his debut at Weill Recital Hall at Carnegie Hall in September and will record his first CD in early 2008. “I can honestly say that now, practicing gives me joy,” comments Xu. “And I wish I had more time —music is everything to me!” “...a technically brilliant, insightful musician of seemingly limitless potential.” – The New York Times