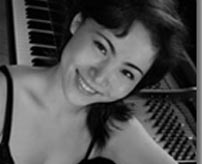 Born in China, Di Wu began her piano study at age four and won her first competition at the age of six. When she was 10, the Japan Television NHK featured her as the rising star in a special program. On full scholarship, she studied for three years at the Middle School of the Central Conservatory of Music in Beijing under teachers Guangren Zhou, Yuan Ling and Jun Yang. In addition to giving solo recitals in China, she has performed frequently with orchestras in China, including concerts with Beijing Philharmonic Orchestra under the baton of Lihua Tang in 1998 and concerts with Guangzhou Symphony Orchestra in 2001.

In 1999, Di Wu entered the Preparatory Division of the Manhattan School of Music on full scholarship, and studied with Professor Zenon Fishbein. She was accepted into the Curtis Institute of Music in 2000, under the guidance of the president of the institute, maestro Gary Graffman.

Di’s musical ability, combined with her uniquely expressive stage presence, has delighted audiences in North America, Asia, Europe, and across the globe.  In March of 2003, she performed three concerts with the National Symphony Orchestra in the Kennedy Center, receiving full standing ovations at every concert, and when Di performed with the Delaware Valley Philharmonic in the February of 2001, she was asked to return for three more concerts with the orchestra in 2002, 2003, and 2005.  Di also performs frequently with Chinese orchestras, including concerts with the Guangzhou Symphony Orchestra in 2001, as well as the Beijing Philharmonic Orchestra under the baton of Lihua Tang in 1998.  In Europe, Di was acclaimed by the German press for her recital in Klavier Festival Ruhr in 2002, as well as her recital in Mozart Gesellschaft Dortmund in 2003.  Last season, Di made her debuts with Pittsburgh Symphony Orchestra, as well as New Jersey Symphony Orchestra under the baton of Kristjan Jarvi. She has also performed with the Singapore Symphony Orchestra, Greater Lansing Symphony Orchestra, Greater Bridgeport Symphony Orchestra, Warren Philharmonic, and has given recitals in Minnesota, Long Island, New York, Philadelphia, Paris, Grenoble and Bolzano (the 1st F. Busoni International Piano Festival).  Most recently, Di performed in Carnegie Hall with the New York Pops, where she was met with a standing ovation and was immediately invited to perform again in 2005.  Di recently graduated with a Bachelor Degree from the Curtis Institute of Music. She will be pursuing her Master Degree at the Juilliard School of Music under the guidance of Dr. Yoheved Kaplinsky beginning this fall.