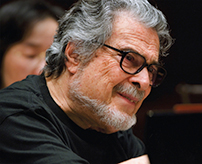 Legendary pianist Leon Fleisher represents the highest standard of musicianship and, at 84 years young, he continues to impart his life-affirming artistry throughout the world, thriving in a sustained career as conductor and soloist, recitalist, chamber music artist, and master class mentor.

Mr. Fleisher made his debut with the New York Philharmonic in 1944 and in 1952, he became the first American to win the prestigious Queen Elisabeth of Belgium competition, establishing himself as one of the world’s premier classical pianists. At the height of his success, he was suddenly struck silent at age 36 with a neurological affliction later identified as focal dystonia, rendering two fingers on his right hand immobile. Rather than end his career, Mr. Fleisher began focusing on repertoire for the left hand only, conducting and teaching. Not until some forty years later was he able to return to playing with both hands after undergoing experimental treatments using a regimen of rolfing and 'botulinum toxin' injections.

In the 2012-2013 season, Mr. Fleisher’s engagements include performances and master classes in Switzerland (master classes at the University and a recital at the Lucerne Festival), Germany (as conductor/soloist of the Bamberg Symphony and playing chamber music at the Tonhalle in Duesseldorf)) , Brazil (Ravel Concerto with the Philharmonic Orchestra in Belo Horizonte and Rio de Janeiro) , France (master classes in Strasbourg), conducting in Taiwan and Japan, and performing in halls across the United States.

A recipient of numerous honors and awards, Mr. Fleisher received the prestigious Kennedy Center Honors in 2007. In 2006, he was the subject of the 2006 Oscar and Emmy-nominated documentary film Two Hands. His recent memoir, My Nine Lives: A Memoir of Many Careers in Music, which he co-wrote with Washington Post music critic Anne Midgette, is published by Doubleday. Most recently, Baltimore philanthropists Robert E. Meyerhoff and Rheda Becker established the Leon Fleisher Scholars Fund for piano students at the Peabody Conservatory, an endowment of over $1,000,000.

Leon Fleisher is a Steinway Artist since 1964