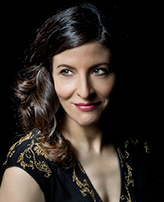 Ingrid Jacoby performs throughout Europe, Asia, Africa, and North America both in recital and as a soloist with the world’s major orchestras. She is the winner of numerous awards and competitions, including the Artists Presentation Award, the Steinway Hall Artists Prize, the Baldwin National Piano Competition and the Gina Bachauer International Piano Competition.  Her highly acclaimed recital at Carnegie Hall was the result of receiving the Concert Artists Guild Award.

Since moving to England, Ingrid Jacoby has performed with the London Symphony Orchestra, London Philharmonic Orchestra, the London Mozart Players and the Royal Philharmonic Orchestra, in the city’s major venues. Throughout her career she has worked with many eminent conductors including Sir Charles Mackerras, Leonard Slatkin, Giuseppe Sinopoli, Walter Susskind, and Lord (Yehudi) Menuhin. Recently she played with the Russian National Orchestra in the Great Hall of the Moscow Conservatory and has also given concerto performances in the Mozarteum at the Salzburg Music Festival. 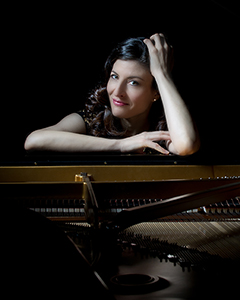 She has given solo recitals at the Wigmore Hall, Queen Elizabeth Hall, St John’s Smith Square, amongst others, and, at the invitation of HHR Prince and Princess of Wales, at Apsley House.  A frequent performer at music festivals such as the Aldeburgh, Aspen, Covent Garden and Tuscan Sun Festivals, there are further recital and recording plans in the forthcoming season.

Ingrid Jacoby’s discography covers a fascinating range of repertoire: the world-premiere recording of Korngold’s solo piano pieces; a CD of Beethoven piano works (voted the Classic FM “Top Classic Release); a solo Russian piano music disc named as one Gramophone critic’s “Pick of the Year”; a recording with the Royal Philharmonic Orchestra and Sir Charles Mackerras of the Shostakovich and Ustvolskaya piano concerti which earned the highest commendation of the American Record Guide.    A popular recording of the Grieg and Schumann piano concerti with the Royal Philharmonic Orchestra will undoubtedly be matched by her current project of recording all the piano concerti of Beethoven.

Ingrid Jacoby is a Steinway Artist and a member of the Steinway Hall of Fame.  In the United States, she joined Jessye Norman and Shirley Maclaine in receiving a Career Life Award from The National Society of Arts and Letters.  Ingrid Jacoby comes from a family with deep musical roots. Her great-great-great-grandfather was the pianist, composer, and Prussian nobleman, Prince Louis Ferdinand (1772 – 1806), to whom Beethoven dedicated his Third Piano Concerto.  Prince Louis Ferdinand was the nephew of Frederick the Great, himself the composer of the famous theme which J S Bach used in his sublime Musical Offering.