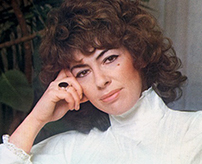 The name Ilana Vered is synonymous with vibrant piano virtuosity since the earliest days of this compelling artist's career. "Shattering," "magnificent," "dazzling," "splendid" are words critics have used the world over to describe Ilana Vered on the concert stage. Renowned for the white-hot intensity of her performances, Ms. Vered now comes before her public as a musician whose art has achieved a rare balance between passion and intellect, temperament and reflection.

Ms. Vered, who has repeatedly demonstrated sovereign musical and technical command over some forty-five concertos--from Bach to Berg--has already recorded for the London label highly lauded versions of the concertos of Mozart, Chopin, Brahms, Tchaikovsky, and Rachmaninov. She has committed to disc the complete set of Beethoven's five piano concertos with the Warsaw Philharmonic under the baton of Kazimierz Kord, released in late 1993 by the ProArte label, represent the culmination of Ms. Vered's long association with the Beethoven concertos--works she has always regarded as the cornerstone of the concerto repertoire. "I have lived with these great concertos for many years, and it was a thrill for me finally to record them," Ms. Vered asserts. "I am always struck by the way the wonderful slow movements of these works proceed out of a kind of all-knowing inner necessity--like a reflective soul caught between the magnificent 'rubble' of the outer movements, in which Beethoven seems to topple huge blocks of sound in a defiant affirmation of joy and humanity."

In addition to her distinguished series of recordings for the London label including: The Brahms No. 2 piano concert, The two popular Mozert piano concerti No. 2 and No. 23, The Rachmaninov Paoanini variations and the No. 2 concertos, Ms. Vered has to her credit a highly-praised version of the complete Chopin Etudes, Opp. 10 and 25, a brilliant recording of the complete Moszkowski Etudes, both for Connoir Records, and Connoisseur Records has release a disc entitled "25 Virtuoso Etudes" on which Ms. Vered offers new readings of concert etudes by Chopin, Schumann, Paganini-Liszt, and Debussy.

Ms. Vered began playing the piano at the age of three, and later attended the Paris Conservatory where she studied with the eminent pianist Vlado Perlemuter. Born in Israel, She graduated from the Paris Conservatory at fifteen, and completed her studies at the Juilliard School in New York City under the tutorship of Rosina Lhevinne, Nadia Reisenberg, and Aube Tzerko. She made her debut as one of the first winners of the Young Concert Artists International Competition.

Ms. Vered has been heard in recital in virtually all of the music centers of the world, and has been engaged and re-engaged as soloist with the leading orchestras of our time: the New York Philharmonic, the Boston Symphony, the Philadelphia Orchestra, the Chicago Symphony, the Cleveland Orchestra, the San Francisco Symphony, the Los Angeles Philharmonic, the London Symphony, Royal Philharmonic, and Philharmonia, the Concertgebouw of Amsterdam, the Orchestre de la Suisse Romande, the Japan NHK Symphony Orchestra, the Munich Philharmonic, and the Israel Philharmonic. She has performed as soloist under the batons of most of the world's finest conductors, including Stokowski, Solti, Mehta, Kempe, Kondrashin, Tilson Thomas, de Waart, Slatkin, Comissiona, Conlon, Davis, Sanderling, Cassadesus, Bertini, Weller, Sawalich, Atzmon, Leppard, rodan, Judd, Foster, Bamert, Janson and Vanska. A regular participant in summer festivals, Ms. Vered has made appearances at the Mostly Mozart Festival in New York, Chicago's Ravinia Festival, Tanglewood, Caramoor, Cleveland's Blossom Festival, the Meadow-brooks Festival in Detroit, and at Los Angeles' Hollywood Bowl.

Ms. Vered is a chamber musician of distinction and has appeared with important chamber ensembles throughout the world. She is noted particularly for her frequent performances with the Tokyo String Quartet. A highlight of this collaboration was Ms. Vered's world premiere performance with the ensemble of Ezra Laderman's Piano Quintet at the Metropolitan Museum in New York City. This work, which was written for Ms. Vered and the Tokyo String Quartet, was later recorded by them for the RCA label.

During the Hampton Summerfest and the Rutgers Summerfest Ilana Vered performed the five Beethoven concertos in one event.

Ms. Vered performed a Beethoven cycle of the complete sonatas and variations for piano and cello, with cellist Sharon Robinson, in Washington, D.C., Santa Fe, New York City, and other major musical centers throughout the United States. Ms. Vered, who has a devoted following in the Far East, appeared in Hong Kong, Taiwan, Singapore, South Korea and toured the major cities of Japan numerous times with the NHK Symphony Orchestra.

Ilana Vered is a Steinway Artist.