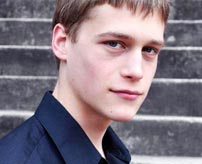 Seventeen year old Micah McLaurin is from Charleston, South Carolina. He began studying piano at the age of 8 under Marsha Gerber, and is currently a student of Enrique Graf at the Charleston Academy of Music. He has won 2nd prize in the Ettlingen International Competition for Young Pianists (Germany), 2nd Prize in the IIYM International Piano Competition, 5th prize in the Hilton Head International Piano Competition, and was the 1st prize co-winner of the 2010 Arthur Fraser International Concerto Competition. In summer 2011, he was one of eight pianists in the world chosen to participate in the Verbier Festival Academy in Switzerland, where he had masterclasses with Stephen Kovacevich, Ferenc Rados, Gabor Takacs Nagy, Lera Auerbach, and others. He has appeared with the Hilton Head Symphony, the Charleston Symphony, the South Carolina Philharmonic, and the Perugia Festival Orchestra in Italy under the baton of Gil Shohat. He has been invited to perform in Germany, Uruguay, and Italy, and was the youngest ever to appear in the International Piano Series in Charleston, a series which has showcased pianists such as Earl Wild, Leon Fleisher, Yuja Wang, among others. The Post & Courier said of his recital in the International Piano Series " He has the uncanny ability to capture just about any composer's unique sound and spirit and convey them to his listeners."