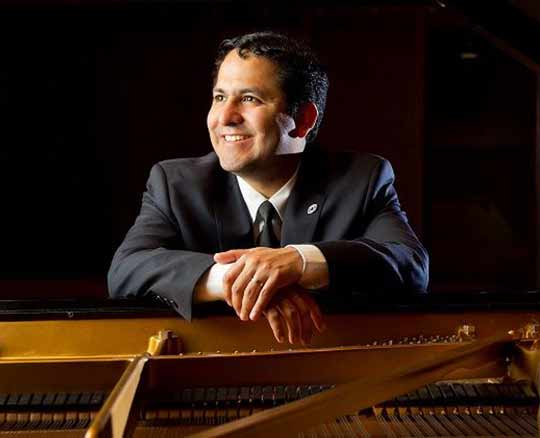 Ecuadorian-American pianist Washington García began his musical studies at the age of 6. Among his teachers have been Genoveva Granja, Toshko Stoyanov, Ann Schein, Yoheved Kaplinsky, and Julian Martin. Dr. García holds a bachelor of music from the National Conservatory of Music in Ecuador, and master’s and doctoral degrees from the Peabody Institute of the Johns Hopkins University, where he graduated at the age of 25 as the youngest Latin American to have received a doctoral degree in piano performance from that prestigious university. The success of his first public performance at the age of 6 led Dr. Garcia to perform at the most important cultural centers in Ecuador. He was awarded first prizes at the Guillermo Wright-Vallarino National Piano Competition held in Quito, the Elizabeth Davis Memorial Piano Competition and the 19th International Young Artist Piano Competition in Washington D.C., the 2004 Baltimore Music Club Piano Competition, and the Harrison Winter Piano Competition. As the winner of the Harrison Winter at the Peabody Institute, Dr. García was selected to perform with the Peabody Concert Orchestra. He was also a top prizewinner at the Yale Gordon Piano Competition and the Russell Wonderlic Piano Competition.

From a very early age, Dr. García became a seasoned veteran of the concert platform, performing extensively throughout his native country. Since his debut with the Ecuadorian National Symphony Orchestra at the age of 15, he has been an active recitalist, soloist, and lecturer in prestigious venues in Italy, Switzerland, Austria, France, Spain, Hungary, Lithuania, Canada, Israel, Chile, Mexico, Ecuador, Colombia, Japan, China, Indonesia, Singapore, Taiwan, and the United States. In the United States, he has offered solo recitals and master classes in almost 30 states.

Dr. García’s international debut took place in Santiago, Chile, where he performed for former President Patricio Aylwin at the Claudio Arrau International Piano Seminar. Subsequently, he was chosen from a large field of contestants from 33 countries by the Kennedy Center for the Performing Arts in Washington D.C. to receive one of two $25,000 grants awarded to pianists in its Fellowships of the Americas Program. As a result, he came to the United States to begin intensive piano studies with Professor Julian Martin at the Peabody Institute. Under the auspices of the Fellowships of the Americas Program he was invited to play at the Kennedy Center Terrace Theater, the Organization of American States, the World Bank, the Inter-American Bank, the Corcoran Gallery of Art, the Department of State and the Mexican Cultural Center in Washington D.C., among others. He was also invited to perform at the National Library and Archives in Ottawa, Canada, where he performed on Glenn Gould’s piano. Dr. Garcia has performed on several occasions with the Ecuadorian National Symphony Orchestra, as well as in Israel with Maestro Sam Zebba and the Campus Orchestra of the City of Tel-Aviv and the Cuenca Symphony Orchestra in Ecuador. Dr. Garcia has performed with several orchestras in the United States, including a last-minute invitation to perform Mozart’s Double Piano Concerto with the Green Valley Chamber Orchestra in Las Vegas. He also toured Italy with the Texas State University Chamber Orchestra, performing Beethoven’s Triple Concerto. Most recently, Garcia was featured as guest soloist with the Austin Symphony Orchestra under the baton of maestro Peter Bay. Garcia has performed and recorded for Radio Television Hong Kong, Opus Classical Radio in Mexico City, WFMT in Chicago, TV Spain, Rogers Broadcasting Company in Canada, and worldwide broadcasts through Univision. He has also been featured in several journals and magazines including the Austin and Texas Monthly, Time Out Jakarta, The Hispanic Outlook in Higher Education, The Washington Post, and several others in Asia, North and South America, Europe, and the Middle East.

In addition to awards granted by the Peabody Institute and the Ecuadorian government, including the prize “Monseñor Leonidas Proaño” and the award “Al Mérito Laboral,” Dr. García received sponsorship by United Airlines. He was also named a Presser Scholar and grant recipient by the Presser Music Foundation. Additionally, he was awarded the Texas State Quarterly Team Award in recognition of outstanding service and the Friends of Fine Arts Awards for Scholarly/Creative Activities and Service. Dr. Garcia was a recipient of a full scholarship by the Peabody Institute of the Johns Hopkins University in addition to scholarships by The Lloyds Bank, The Zaldumbide Rosales Foundation, and the British Embassy in Ecuador.

Dr. García served on the faculty of the Peabody Preparatory of the Johns Hopkins University and is a faculty member at the InterHarmony International Music Festival in Tuscany, Italy and the Peabody Piano Festival in Baltimore, Maryland. He is currently the Director of the School of Music at the University of Nebraska at Omaha where he is also a Professor. Previous to his appointment at UNO, Dr. Garcia was a Professor of Piano at Texas State University, where he was also the Assistant Director of the School of Music.

Washington García became a Steinway Artist on 2014 and a citizen of the United States on March 2013. He lives with his wife Valeria in Omaha, Nebraska.