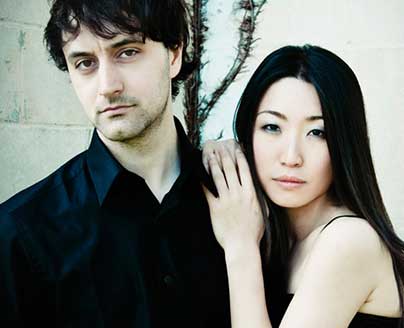 First prize winner of the 2010 Naumburg International Piano Competition and the 2004 Concert Artist Guild International Competition, Korean-American pianist Soyeon Kate Lee has been lauded by the New York Times as a pianist with "a huge, richly varied sound, a lively imagination and a firm sense of style," and by the Washington Post for her "stunning command of the keyboard.” She has performed as soloist with numerous orchestras, including The Cleveland Orchestra and the London Symphony Orchestra, as well as the Orquesta Sinfónica Nacional in the Dominican Republic, Orquesta de Valencia, Louisiana Philharmonic Orchestra, Juilliard Orchestra, San Diego Symphony, and Naples Philharmonic. In recent seasons, she has given recitals at New York’s Zankel, Alice Tully, and Merkin halls, Kennedy Center, Ravinia Festival, Madrid's National Auditorium, and San Francisco’s Herbst Theatre. A Naxos recording artist, she records a double CD of Scriabin piano works this season following the Scarlatti and Liszt albums released earlier. A second prize and Mozart Prize winner of the Cleveland International Piano Competition and a laureate of the Santander International Piano Competition in Spain, she has worked extensively with Richard Goode, Robert McDonald, Ursula Oppens, and Jerome Lowenthal. Ms. Lee is the co-founder and artistic director of Music by the Glass, a concert series dedicated to bringing together young professionals in New York City. A Yamaha Artist, Ms. Lee is an Assistant Professor of Piano at the Cincinnati-College Conservatory of Music, and lives in Cincinnati with her husband, pianist Ran Dank, and their one year old son, Noah.

Technically dazzling and intellectually probing artistry exemplify pianist Ran Dank who won a coveted place on the Young Concert Artists roster in 2009 and subsequently made his New York recital debut sponsored by YCA and the Jerome L.Greene Foundation at Merkin Hall December 14, 2009. He was a laureate of the Cleveland International Competition, the Naumburg Piano Competition and the Sydney International Piano Competition and First Prize winner of the Hilton Head International Piano Competition. He recently completed Doctoral studies with Ursula Oppens and Richard Good at the Graduate Center of the City University of New York as a Chancellor's Fellow, and previously received a Bachelor's Degree from the Rubin Academy of Music at Tel Aviv University in his native Israel and a Master's Degree and Artist Diploma from The Juilliard School. Among recent highlights are performances with the Jerusalem Symphony, Asheville Symphony, concerts with the Phoenix Symphony and numerous other ensembles. He plays the Brahms Concerto in B-flat Major with the Charleston Symphony in spring 2016. Ran has been presented by the Washington Performing Arts Society at the Kennedy Center, the Chopin Festival in Warsaw, Finland's Mantta Festival, the Israel Conservatory of Music and chamber music at YCA's Tokyo Festival, the Seattle Chamber Music Festival, the Montreal Chamber Music Festival and the Israel Festival in Jerusalem. In 2014 Ran Dank joined the Music Department Faculty of the College of Charleston as the Director of Piano Studies and Assistant Professor and also serves as Artistic Director of the College of Charleston International Piano Series.