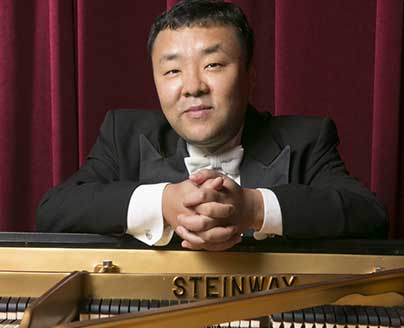 Pianist Jason Kwak has already enjoyed a successful career, both as an artist and as a pedagogue. Born in Seoul, South Korea, Dr. Kwak began his piano studies at the age of four. He has earned his degrees in Piano Performance from Eastman School of Music and The University of Texas at Austin. His principal piano teachers include David Watkins, Douglass Weeks, Barry Snyder, and Nancy Garrett. Dr. Kwak is currently a Professor of Piano and Coordinator of the Keyboard Area at Texas State University. Previously, he has held teaching positions at Texas A&M University-Kingsville, The University of Texas at Austin, The University of Texas Extension Program, and the Austin Chamber Music Center. He is consistently in high demand for performances, master-classes, lectures, and adjudications on a state, national, and international level.

As an educator, Dr. Kwak is a dedicated teacher who has been recognized numerous times for his teachings. Most notably, in 2011, Dr. Kwak was the recipient of the Presidential Award for Excellence in Teaching from Texas State University. In 2004, Dr. Kwak received the Presidential Award for Excellence in Teaching from Texas A&M University-Kingsville. He has presented many lecture performances including lectures for Victoria Symphony, Jeju Philharmonic Orchestra, Corpus Christi Music Teachers Association, Kingsville Music Club, Austin District Music Teachers Association, Jeju National Museum, Texas Music Educators Association Convention and The University of Texas at Austin. Further, Dr. Kwak's students garnered several recognitions in competitions at the regional, national and international level. Dr. Kwak was recently featured by Texas State University in their "Profiles in Teaching" series. Currently, Dr. Kwak serves as the Director of the Texas State International Piano Festival, which is in its seventh year. Also, in 2014, Dr. Kwak joined the faculty at InterHarmony Internationales Musik-Festival held in Arcidosso, Italy.