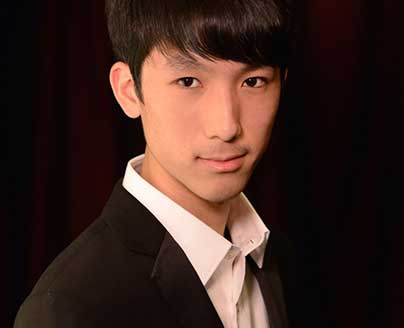 18-year old pianist Eric Lu is rapidly building an international reputation as a young pianist with enormous promise, and a distinctive musical voice. Eric is the 1st prize winners of the IX Moscow International Chopin Competition for Young Pianists, and the 2015 US National Chopin Competition in Miami, where he also received the best concerto prize. In October 2015, at 17 years old, Eric won the 4th prize at the 17th International Fryderyk Chopin Competition in Warsaw, becoming one of the youngest laureates in the history of the competition. Earlier achievements include 1st prizes at both the XII Ettlingen International Competition in Germany(2010), and the Minnesota International e-Piano Junior Competition(2013). Described by the New York Classical Review as a musician of "exceptional musical sensitivity", as well as by Michael Moran from the Duszniki Festival proclaiming, "The tone he produced was luminous, the articulation spellbinding and exciting, the legato and bel canto desperately moving." He received further recognition by the public, winning the Tabor Foundation Piano Award at the Verbier Festival Academy 2015.

With his concert life being very fresh and new, he has already received compelling responses by audiences worldwide to the unique beauty, and intensity of the music he plays. Eric has performed in venues such as the Auditorio Nacional Madrid, Warsaw Philharmonic Concert Hall, Boston's Jordan Hall, Beijing Concert Hall, Seoul Arts Center, Tokyo Metropolitan Theatre, Sapporo Concert Hall, among others. Highlights of the 2015-16 season included recitals at Carnegie Hall in New York and at the 70th International Chopin Festival in Duszniki-Zydrój, Poland. Eric has collaborated with orchestras such as the Warsaw Philharmonic, Minnesota Orchestra, Orquestra Clasica Santa Cecilia, New Jersey Symphony, Cincinnati Chamber Orchestra, among others.

He started piano studies at the age of 6 with Mrs. Dorothy Shi near Boston, MA. While at the New England Conservatory Preparatory School, he studied piano with Alexander Korsantia, and Mr. A. Ramon Rivera. In 2013, Eric entered the Curtis Institute of Music in Philadelphia, where he currently studies with Profs. Jonathan Biss and Robert McDonald. He is also a pupil of pianist Dang Thai Son.