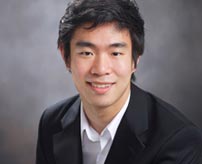 Sejoon Park was born to cellist parents in Seoul Korea, in 1990. He began piano studies at the age of six. His early accomplishments include orchestral debut with Busan Philharmonic Orchestra in Korean at the age of ten. He moved to the United States in 2001 and studied at the Levine School of Music in Washington, DC until 2006. Currently, he studies with Professor Boris Slutsky at Peabody Conservatory of Music. He also has worked with Piotr Palezny, John Perry, Peter Takacs, Larrisa Dedova, Nelita True, Natalya Antonova, and Lang Lang in master classes.