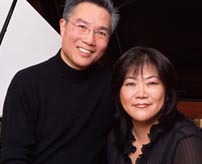 Hailed by critics for her remarkable technique, tonal beauty and musicianship, Angela Cheng is one of Canada’s most distinguished and respected pianists. She has appeared as soloist with numerous orchestras, including the Israel Philharmonic, Boston Pops, Buffalo Philharmonic, and the symphonies of Montreal, Toronto, Vancouver, St. Louis, Houston, San Diego, Indianapolis, Syracuse, Utah and Colorado. An avid recitalist, Ms. Cheng appears frequently in major venues throughout Canada and the United States; she also collaborates with chamber ensembles such as the Takacs, Colorado and Vogler quartets. In recent seasons, at the invitation of Pinchas Zukerman Ms. Cheng has toured China, Europe, South America and the U.S. with the Zuckerman ChamberPlayers. Her many honors include a Gold Medal at the Arthur Rubinstein International Piano Masters Competition, the distinction of being the first Canadian to win the prestigious Montreal International Piano Competition, the Medal of Excellence from the Salzburg Mozarteum for her outstanding interpretations of Mozart, and a Career Development Grant from the Canada Council. In 2010, she received an honorary doctorate from the University of Alberta. Ms. Cheng’s debut recording of two Mozart concerti with the CBC Vancouver Orchestra received glowing reviews. Other CDs include: for Koch International, Clara Schumann’s Concerto in A Minor with JoAnn Falletta and the Women’s Philharmonic; for CBC Records, selected works of Clara and Robert Schumann, four Spanish concerti with Hans Graf and the Calgary Philharmonic, the two Shostakovich concerti with Mario Bernardi and the CBC Radio Orchestra, and most recently, an all-Chopin solo disc. Ms. Cheng has studied with Menahem Pressler at Indiana University and Sascha Gorodnitzki at the Juilliard School. She is currently on the artist faculty of the Oberlin Conservatory of Music.

Pianist Alvin Chow has performed throughout North America and in Asia as orchestral soloist and recitalist. He has been a prize winner in numerous competitions, including the University of Maryland International Piano Competition, the MTNA Collegiate Artist Competition, and the New York Piano Teachers Congress International Piano Competition. His appearances as soloist with orchestra include the National Symphony Orchestra, Colorado Symphony Orchestra, Civic Orchestra of Chicago, Pan-Asia Symphony in Hong Kong and the Mozarteum Orchestra in Salzburg. Mr. Chow has also become widely known as a chamber musician, performing extensively with his wife, Angela Cheng, and his twin brother, Alan. A native of Miami, Florida, he graduated Summa cum laude and Co-Valedictorian at the University of Maryland, where he was a student of Nelita True. Mr. Chow also received the prestigious Victor Herbert Prize in Piano from the Juilliard School, where he studied with Sascha Gorodnitzki, and held the Joseph Battista Memorial Scholarship at Indiana University as a student of Menahem Pressler. Formerly a professor at the University of Colorado at Boulder, he is currently Chair of the Piano Department at the Oberlin Conservatory of Music.