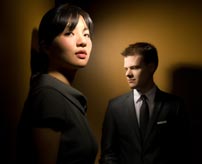 GREG ANDERSON and ELIZABETH JOY ROE are perhaps the most thrilling young duo performing today, offering adrenalized classical concerts that are revolutionizing the piano duo experience for the 21st century. Described as “Fred Astaire and Ginger Rogers transposed from the dance floor to the keyboard” (The Southampton Press) and “the intense synchronization of genius” (ThirdCoast Digest), Greg and Liz bring their joyous camaraderie and refined artistry to the concert stage, dazzling audiences around the world as a four-hand and two-piano team.

Greg and Liz met in 2000 as freshmen at The Juilliard School and formed their dynamic musical partnership shortly thereafter. They have since toured North America (and beyond), with notable performances in Los Angeles, San Francisco, Portland, Salt Lake City, St. Paul, Fort Worth, Milwaukee, Orlando, and Washington, D.C., as well as in nearly every New York City venue imaginable, from Carnegie Hall to children's hospitals. Together they have appeared on MTV and NPR, the Cliburn Concert Series, the Gina Bachauer International Piano Festival, and dozens of summer chamber music festivals. In recognition of their singular vision for the advancement of classical music, Greg and Liz have been invited to present at several international leader symposiums, including the 2008 and 2010 Entertainment Gatherings (EG) in Monterey, California and the 2010 Imagine Solutions Conference in Naples, Florida. The Anderson & Roe Piano Duo released their debut album, “Reimagine,” in 2008.

Greg and Liz left an indelible impression at The Juilliard School, where they both earned their bachelor's and master's degrees. They were granted the honor to perform on numerous prominent Juilliard events, and a live performance by the duo is even included on the “Sounds of Juilliard” CD celebrating the school's centennial year. In 2006, given only two months to compose and prepare, the Anderson & Roe piano duo gave the world premiere of their own composition “Star Wars Fantasy: Four Impressions for Two Pianos,” replacing John Williams on Juilliard's “Cinema Serenades” concert in Alice Tully Hall. Additionally, the two directed the groundbreaking project “Life Between the Keys,” a concert that involved the entire Juilliard Piano Class of 2004; this event celebrated the class's unique friendships and chronicled its Juilliard experience in an all-American program of piano music.

The duo’s interactive website, andersonroe.net, has generated tremendous enthusiasm among fans and Internet bloggers. The duo responds regularly to user questions and comments, and their wildly creative, self-produced music videos have been viewed millions of times on YouTube alone. Greg and Liz believe strongly in the communicative potential of music, and they aim to make classical piano music a relevant and powerful force in society. Their performances, compositions, websites, videos, recordings, and writings all serve this mission, bringing joy to people around the world. As the Northwest Reverb recently stated, “[Anderson & Roe] swept the audience into a cheering mass of humanity, making a strong case that playing piano is the most fun thing that two people could ever do together.”