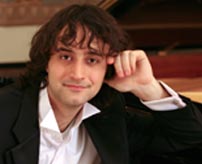 Lauded by the press as "a pianist of the highest order" and as "a giant of the piano", RAN DANK was born in 1982 in Israel.

Mr. Dank has won virtually every major prize available for a young musician in his country. He has been receiving The America Israel Cultural Foundation scholarships since 1992 and the special Scholarship for Studies Abroad. Prizes in competitions in Israel include the Voice of Music Competition, and the first prize, the Rafi Goralnik award at the Aviv Competitions 2002, the most important competition for musicians in Israel.

In 2006 Mr. Dank has won the Gina Bachauer competition held at The Juilliard School and in 2007 he was the recipient of both the Arthur Rubinstein Prize and the 4th prize at the Cleveland International Piano Competition. In March 2008 Mr. Dank was awarded with the grand prize of $15,000 and gold medal at the Hilton Head International Piano Competition, resulting in different engagements including his debut recital in Carnegie Hall in the fall of 2008. In August 2008 Mr. Dank was awarded with the third prize at the Sydney International Piano Competition including special awards by the Sydney Symphony for the best performance of the two concertos in the final and awards for the best performance of a work by Debussy and a work by Rachmaninov. As a result Mr. Dank has toured throughout Australia for the entire month of August.

Mr. Dank has given recitals and concerts in the U.S.A, Belgium, Poland, France, England, Germany, Finland, Russia and throughout Australia in prominent venues such as Jazz at Lincoln Center, Steinway Hall, Alice Tully Hall, and The Peter Jay Sharp Theatre in New York, Severance Hall in Cleveland, OH, the Glazunov Hall in St. Petersburg and the Sydney Opera House in Sydney, Australia.

Dank has been taking part in numerous festivals such as the Chopin Festival in Warsaw and Zelazowa Wola performing programs by Chopin and Liszt, the Israel Festival in a complete Scriabin Sonatas cycle, and has played a variety of programs combining some rarities of the piano literature in the Mäntta Festival for Virtuoso Pianists in Finland.

Dank started playing the piano at the age of seven with Mr. Yaakov Krantz. He went on to work with Liora Peleg at the Givaataim Conservatory and from 1994 until 2002 he studied with Prof. Vadim Monastirsky of the Jerusalem Academy of Music and Dance. In the years 2000-2003 Dank has served under a special musician status in the Israeli Defence Force.

In the years 2004-2005 Mr. Dank attended the Tel Aviv Rubin Academy of Music, where he received his B.A. in music studying with Prof. Emanuel Krasovsky. In the years 2005 Dank received his M.M degree with Professors Emanuel Ax and Joseph Kalichstein at The Juilliard School in New York. Since 2007 Dank has been pursuing the coveted Artist Diploma degree at the Juilliard School with Mr. Robert McDonald.