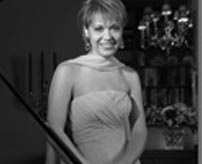 With her performance of Sergei Rachmaninoff's Piano Concerto No. 3 at the 11th Van Cliburn International Piano Competition in 2001, Olga Kern won the Gold Medal and became the first woman to achieve this distinction in over 30 years. Olga's second triumph came in New York City on May 4, 2004, with a highly acclaimed New York City recital debut at Carnegie’s Zankel Hall. Eleven days later, on May 12, 2004, in an unprecedented turn of events Olga Kern gave a recital in Isaac Stern Auditorium at the invitation of Carnegie Hall.

With her vivid stage presence, passionately confident musicianship and extraordinary technique, the striking young Russian pianist Olga Kern has continued to captivate fans and critics alike. Across the United States, in each season, she is in demand for re-engagements and new appearances, and is quickly being recognized world-wide.

After a critically acclaimed 35 city tour of the US in spring, 2007 with the National Philharmonic Orchestra and Vladimir Spivakov, Ms. Kern opens the 2007-2008 season as guest soloist with the Colorado Symphony, to be followed by appearances with the Nashville Symphony and her debut with the Vancouver Symphony. Miss Kern will present the Inaugural Concert of the Southeastern Piano Festival in Columbia, South Carolina as well as recitals in Santa Fe, New Mexico and in Sanibel and Palm Beach, Florida. In May of 2008 Olga Kern will tour North America with Maestro Vladimir Spivakov and the world renowned Moscow Virtuosi, presenting concerts in Boston, Chicago, New York, Philadelphia, Seattle, Washington DC, and Toronto.

Olga Kern made her London debut with the Royal Philharmonic Orchestra in November 2006 playing Shostakovich Piano Concerto No. 1 with Leonard Slatkin conducting. Recent European appearances have included a tour of Austria and Switzerland with the Warsaw Philharmonic and Maestro Antoni Wit and a tour of Germany with the Czech Philharmonic and Maestro Zdenek Maçal. Upcoming engagements in Europe will include her Proms debut at Royal Albert Hall playing Rachmaninoff’s Paganini Variations with Leonard Slatkin in August 2008. She is also scheduled to perform with the orchestras of Copenhagen and Lyon, and she will be presenting recitals in Milan, Hamburg and Luxemburg. Ms. Kern will make her South American debut with the Orquestra de São Paulo in March 2008. She recently made her Canadian debut with the National Arts Centre Orchestra and conductor Pinchus Zukerman in summer 2007, and she made her debut with the Taipei Symphony in June of 2006.

Ms. Kern has performed in many of the world's most important venues, including the Great Hall of the Moscow Conservatory, Symphony Hall in Osaka, Salzburger Festspielhaus, La Scala in Milan, Tonhalle in Zurich, and the Châtelet in Paris; she has appeared as soloist with the Bolshoi Theater, the Moscow Philharmonic, St. Petersburg Symphony, Russian National, China Symphony, Belgrade Philharmonic, La Scala Philharmonic, Torino Symphony, and Cape Town Symphony Orchestras. She has also performed with the Kirov Orchestra under the direction of Valery Gergiev at the Kennedy Center.

Ms. Kern was born into a family of musicians with direct links to Tchaikovsky and Rachmaninoff and began studying piano at the age of five. Winner of the first Rachmaninoff International Piano Competition when she was seventeen, she is a laureate of eleven international competitions and has toured throughout her native Russia, Europe, and the United States, as well as in Japan, South Africa, and South Korea. The recipient of an honorary scholarship from the President of Russia in 1996, she is a member of Russia’s International Academy of Arts. She began her formal training with acclaimed teacher Evgeny Timakin at the Moscow Central School and continued with Professor Sergei Dorensky at the Moscow Tchaikovsky Conservatory, where she was also a postgraduate student. She also studied with Boris Petrushansky at the acclaimed Accademia Pianistica Incontri col Maestro in Imola, Italy.

Ms. Kern records exclusively for Harmonia Mundi. Her most recent recording of Brahms Variations will be released in September of 2007. Her discography includes recordings of Tchaikovsky Piano Concerto No. 1 with the Rochester Philharmonic Orchestra and Christopher Seaman (2003), a Rachmaninoff recording of Corelli Variations and other transcriptions (2004), a recital disk with works by Rachmaninoff and Balakirev (2005) and Chopin’s Piano Concerto No. 1 with the Warsaw Philharmonic and Antoni Wit (2006). She was also featured in the award-winning documentary about the 2001 Cliburn Competition, Playing on the Edge.